Finally! It was night, about half past one, as we left the airplane. The air outside was warm (about 32 degrees Celsius). We eventually made it, arrived in Luxor. Now, we had only one whish: To go to bed, sleep. To be fresh at the next day, starting our adventure trip through the land of the pharaos. 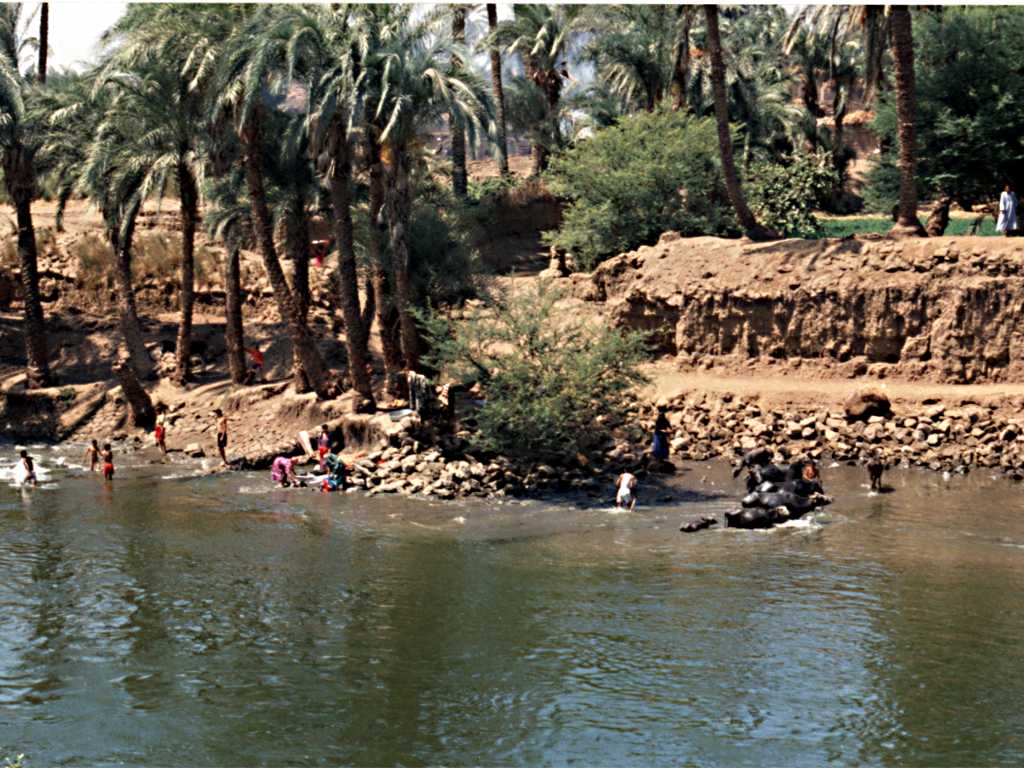 With our boat we go against the stream towards the city of Aswan, passing some groves of palms, seeing behind them the infinity of the desert Sahara. Many times we could watch natives doing the things of every day's life at the banks. 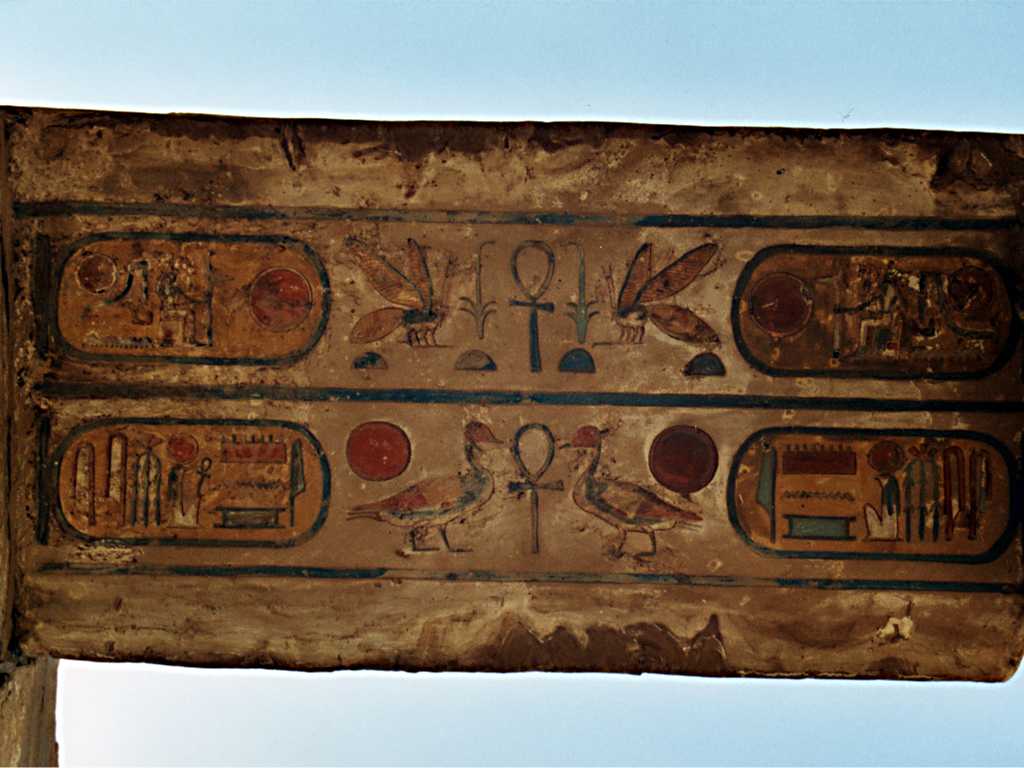 The next days left like the blink of an eye. Every day the boat landed to let the masses of our travel-mates go. We saw all the temples of the ancient times. The days were hot, bright and dry, making everybody sweat just seconds after leaving the boat. In the evening we noticed with pleasure a gentle breeze. But hey, it was as hot and dry as the day was. In the lights of our boat we saw thousands of small insects, magically drawn to the light. After some days, we didn't hear the ever present crackle of those, that touched the electrical grating, any longer... 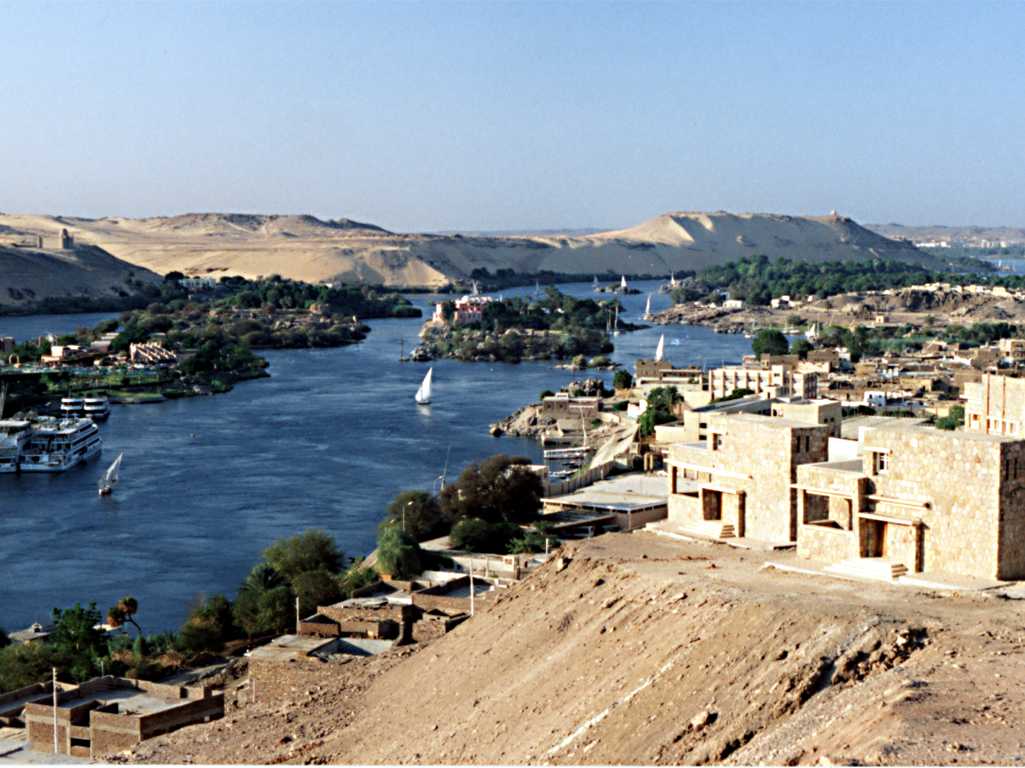 After three days going by boat we arrived at the most south point of our journey, which we could reach by boat: Before us, we saw the city of Aswan. Famous trade center of spices and all the other "typical oriental" things. They were taken here from south, mostly from Sudan.

We stayed here for two days, visiting every little part of the proximity. The well-known high dam of Aswan isn't that breath takeing as everone tells. Who looks for a dam like in one of those James Bond films, will be disillusioned. On its land side, it is nothing more than a merely steep slope of raw rocks. On the other side, one can see the incredible view of a lake reaching to the horizon, touching with its shore directly the wide desert without the smallest green.

Then for the first time in this trip, we need to get up very early: The convoi with our bus started at 4 (am!), heading to Abu Simbel. There you can see the huge temple, build in a large rock by the workers of Ramses II. It is located in the remote south of Egypt. The night was as dark and clear as I (being a inhabitant of a city) ever dreamt of. Thanks to the extremely dry climate of the desert, you could see lots of stars. Then, out of nowhere, we saw shooting stars drawing their fiery lines on the sky.

Abu Simbel is one of the "later" temples of Egypt. It was built in about 1200 BC. It was made as a warning to the Nubian, living in the south: I, Ramses II., am the ruler of this territory, submit! 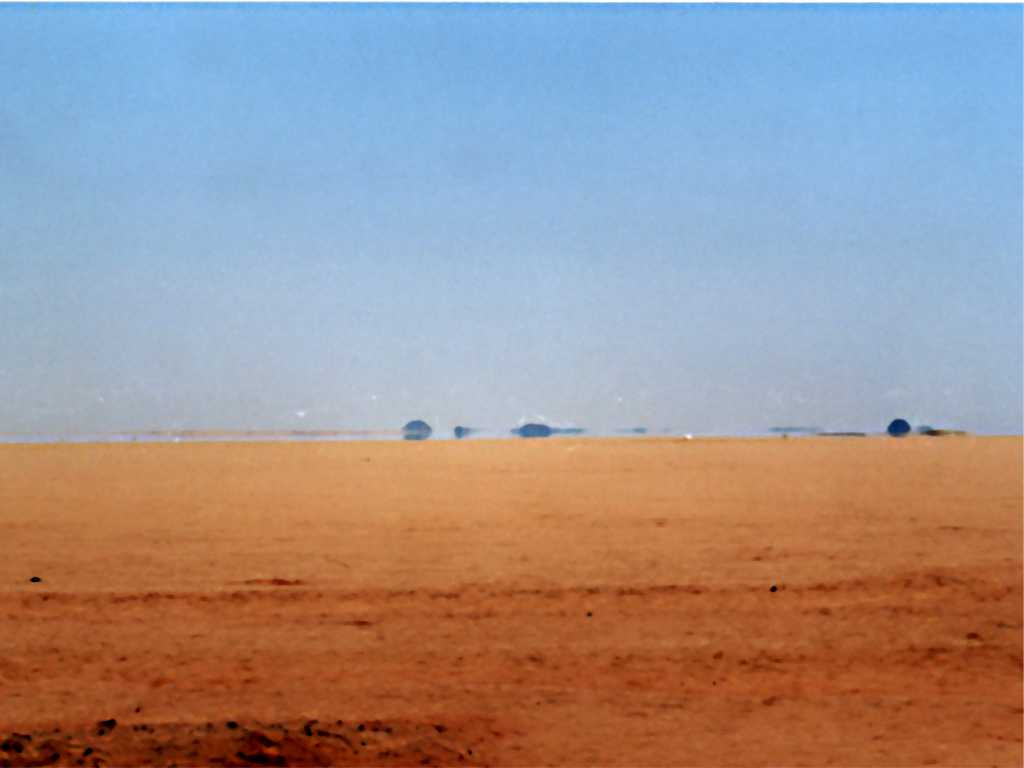 At about eleven, you can't stand the heat here. But we had to go for about three hours back by bus through this hot land. The aircondition sent showers of fine sand into the bus, drying the throats of the passengers. Than, in the middle of nowhere, the bus stopped. We should look at the "forest of the bus drivers". Forest?? Here in the desert? But really: Beside the road there were some small trees of Gingko. They got their water from the bus drivers, who stopped here every time they move from Abu Simbel back to civilisation. Actually, we stopped here to see the hot air pretending to be water on the horizon. This you can see here every day the same time, we were told by our guide. 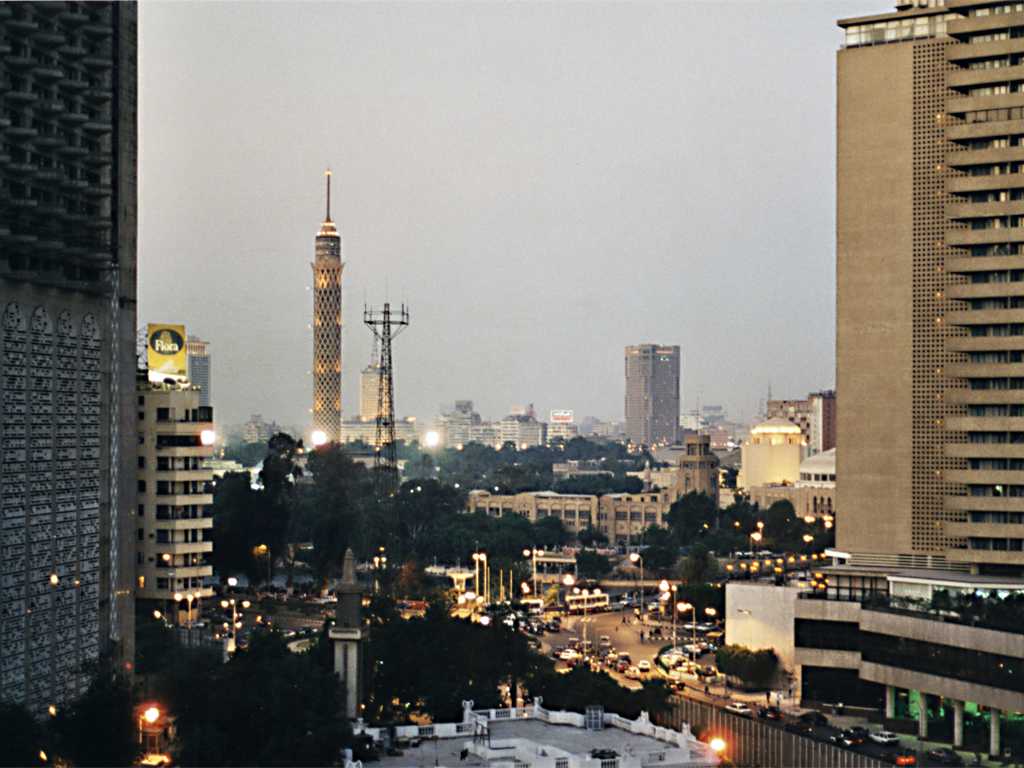 Back on our boat, we headed back to Luxor. From there, we continued our journey by bus. Travelling by ship through the middle of Egypt is too dangerous. Every one still have the attacs on the tourists in mind. So we went with those who decided to relax (and get a dark brown teint) another week in Hurghada. (We called them "roasties") After one night staying in one of the tourist ghettos - pardon, ressort hotels - we went on with some others with a small bus. We followed the coast of the Red Sea, heading to Cairo. The Red Sea was sometimes so small, that we could merely see the other coast belonging to Saudi-Arabia at the horizon. 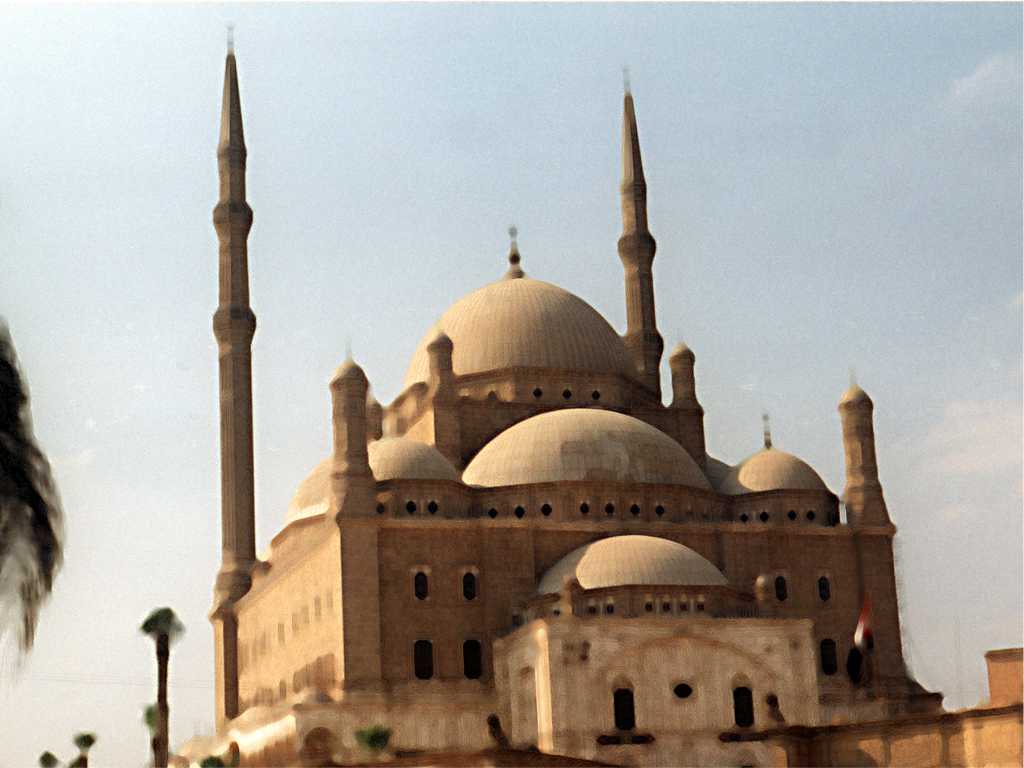 What difference! After days of silence and monotony of the desert, we were caught by the hectic of this city hosting about 20 million people. Here we stayed for three days in a hotel near the city center. Now we enjoyed the standard program that every tourist in Egypt probably get: The pyramids, the Egypt Museum and the mosque of Mahammad Ali. 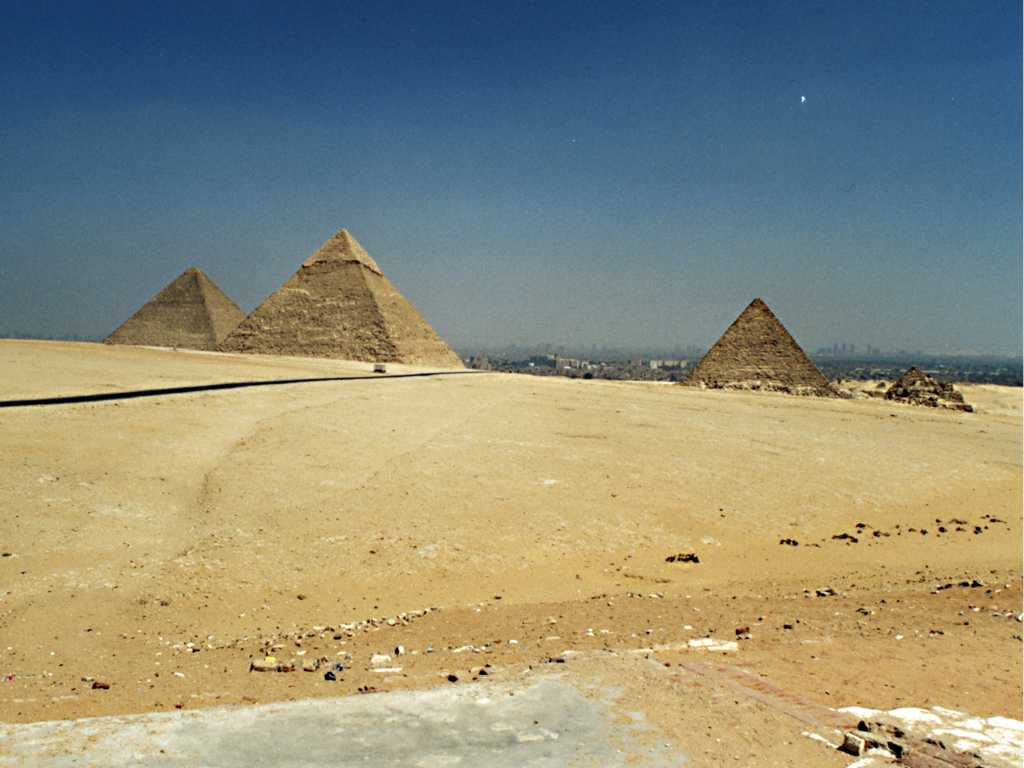 The pyramids were sieged by merchants who wanted to sell post cards and such stuff to ridiculus prices. Others told us to go with them and their camels into the near desert (and hopefully back). As there were very little tourists this day, we had problems to avoid them, but finally managed it to look at the monuments rather undisturbed. 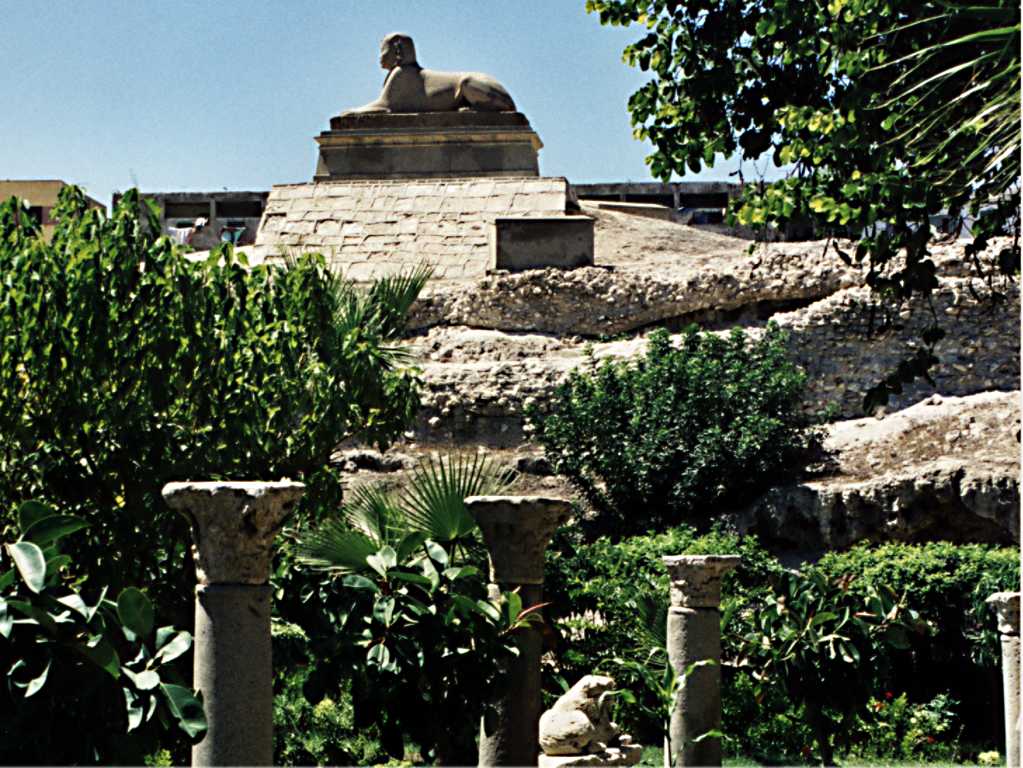 The next day we made a short trip to Alexandria. This city of "only" 4 million inhabitants looked like a tiny village compared to Cairo. Maybe this is the reason for many people of Cairo to spend their summer vacations here, increasing the number of inhabitants to over 7 million. One noticable thing of Alexandria are the Greek and Roman influences in architecture here. The temples for example, do have both egyptian and greek parts on it.

After that, the last part of our journey began. Here, we got to know the third kind of desert: Besides the desert of sand (aka Sahara) and the desert of rocks at the east side of the river Nile, we now saw a landscape made of mountains out of green. Pure rock, which seemed to have strange colors in the sunlight. And between them a narrow passage, on which we went on.

In the evening we arrived at the base of the Mount Sinai. At this time, we didn't know what was awaiting us the next day. The only thing was, that we had to get up at half past 2 in the morning. The night went by very fast and the alarm clock ringed to wake us up. We must have been crazy to join that trip! But the real torture hadn't begun yet. We ascended the Mount Sinai in complete darkness. It was so dark, that you have to be cautious not to run into the basckside of a camel staying right before you. Luckiely, you could smell them hundreds of meters beforeward. We could have lent such a camel to ride most of the mountain up. But hey, we were here to manage it by our own power! 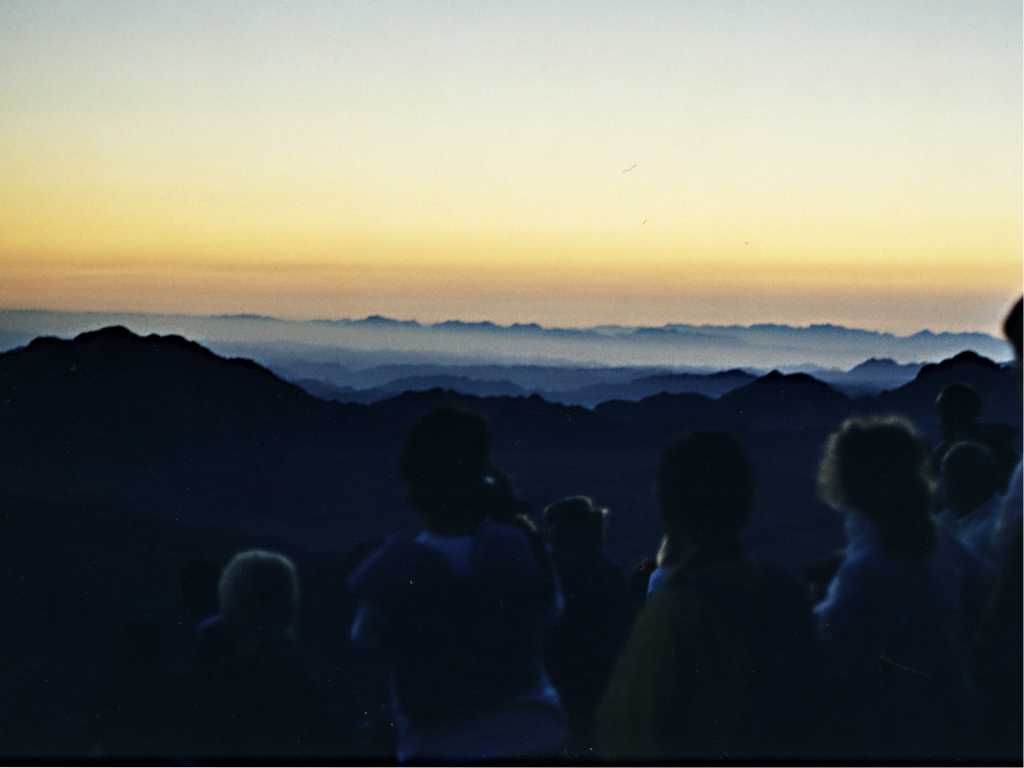 After about one half I started to curse my own stubbornness. I had problems to get enough air and I couldn't even imagine the end of the way up. After two and a half hours we reached the point, from which on everybody had to walk (the camels stopped here). Just to make it a bit harder, the rest of the path was build as a "stairway". The steps were build out of rough rocks, loosely laid together. After another one and a half hour and uncounted curses later we reached the top. Just on time to join the community who was viewing at the sunrise here in about 2400 meters.

Arrived back down at our bus (and at the end of our journey through Egypt) we were at one: ready for holiday!